How come we all don't know about All Hallows Wellingborough??!

On a recent visit to see a friend we popped into this church. What a stunner, a Grade 1 listed building with the most astounding collection of the pioneering 'big names' of modern stained glass (rubbing alongside and not forgetting the famous Victorian studio of James Powell and Sons, Whitefriars!). Sadly my pictures were not great and if you visit this church I would love to update this blog, credit you and feature any better stained glass photos you have.

First this window by Jean Barillet, son of Louis Barillet (see earlier blog post), the sun was blazing through the strong colours of these panels dedicated to St Crispin and St Crispinian, patron Saints of the boot and shoe making industry, making the figures vivid and intense.

Looking for information on Jean Barillet I came across this write up stored in The Universal Digital Library;


The young Parisian Stained Glass Artist Jean Barillet
succeeded a few years ago his father Pierre Barillet, a great
artist himself who lived his whole life among the most brilliant
gathering of French painters such as Matisse, Vlaminck,
Utrillo; and was the first to foresee the tremendous possib-
ilities that modern Painting can bring to the art of Stained Glass.
Jean Barillet carries on, in the studio built by his father,
researches in the artistic and technical fields of his activity.
He was the first to try out and expand the fascinating
new process consisting of thick slabs of coloured plate glass set
in cement, thus, curiously enough, coming back through the
ages to the simplicity and the slightly primitive means of
expressing their Faith of the middle-Ages old Masters.
Recently, Jean Barillet contributed, with the well-known
French painter Fernand Leger, huges pannels of cement-set
glass meant for the experimental Church of Audincourt; thus
placing Stained Glass at the Spearhead of modernism.

Jean Barillet (1912 - 1997) had an extensive and impressive career working in Basilicas, Cathedrals and Churches in many countries including the Cathedral of Notre Dame in Paris, The Cathedral of St Joseph in Hartford USA, Church of Audincourt (France) and many many more.

Evie Hone (1894 - 1955) was an Irish stained glass artist described by the Tate as 'an outstanding religious painter of modern Ireland and a stained glass artist of international stature'. In All Hallows she made the Alice Maud Middleton Memorial Window with ideas and symbolism based on the Creation.

Evie Hone created many stunning windows including 'My Four Fields Green' showing the 4 symbols of the provinces of Ireland and this work is now in Government Buildings, Office of the Taoiseach, Dublin and a huge and complex window in the chapel of Eton College, Berkshire.

this is his later Constance Chapman Memorial Window from 1969 about which he said "It is what you make it to be";

John Piper with Patrick Reyntiens, created the windows at Coventry Cathedral, the chapel of Robinson College Cambridge and the Washington National Cathedral amongst many others. On this sunny day they proved their absolute skill in working colour, light, shape and form.

All Hallows Church is the oldest existing building in Wellingborough dating from c. 1160, you can find it on the Wellingborough Council Heritage Trail and there appear to be occasional tours of the stained glass advertised on the All Hallows Facebook page.
Posted by Delia Scales at 16:50 No comments:

I've just completed a repair on a simple diamond quarry patterned glass. The panel was primarily made with old English Muffle. The lovely glass has a history that stretches right back to the factory style stained glass industries of the Victorian era. It is still made today though the original daisy pattern has morphed into a kind of coffee bean hammer effect. The colours also have changed being softer and more muted originally (though with some surprising bright colours thrown in) to much brighter and stronger colours now. One of the most attractive properties of the old version is the way that the pattern can vary so much sheet by sheet so it can appear very flat but also very rippled so you end up with some very lively panels shifting in texture but all using the same glass. Here is the rebuild I just completed;

and here are a couple of panels I rebuilt showing the beautiful subtle old colours. 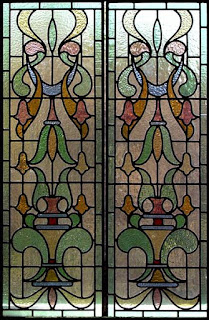 and below in the rectangles is the new version of this glass, ever popular for it's good obscurity and pleasing pattern today! 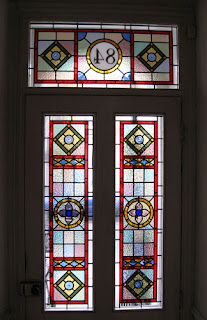 Posted by Delia Scales at 19:05 No comments: